Game of Thrones, Crown of Thorns-1

Game of Thrones, Crown of Thorns-2

RISE UP: Daughters of Eve

“The Last Letter: Game of Thrones,
Crown of Thorns—1”
www.newperceptions.tv

• The promise: You will sit with Me on My  one day.

• The condition: You must first today.

• Sigve Tonstad: “Awareness of conflict changes the way we construe victory and defeat. While Jesus makes promises ‘to everyone who conquers,’ with no object in the sentence, the tenor of conflict is better preserved if we translate it ‘to everyone who overcomes .’ It is not wrong to say that the believers ‘overcome’ or ‘conquer,’ but it is implied throughout that they are engaged in a .”

• “If the curtain could be rolled back, and each one could discern the constant activities of the heavenly family to preserve the inhabitants of the earth from Satan’s seductive
wiles, . . . [t]hey would see that the armies of heaven are in continual warfare with satanic agencies, to obtain victories in behalf of those who do not sense their danger, and who are passing on in unconscious indifference. Angels are belting the world, refusing Satan his claims to supremacy. . . . We hear not the voices, we see not with the natural sight the work of these angels, but their hands are linked about the world, and with sleepless vigilance they are keeping the armies of Satan at bay.” (In Heavenly Places 98)

• Reason #1—We do not fully appreciate the sinfulness of  .

• Vaughn Allen: “We do not realize how utterly detestable sin is; we do not comprehend how contrary sin is to God’s character and how terribly offensive it is to Him. We have lived with sin and its results so long and toyed with it so much that for us it has lost much of its horror and repugnance.” (The War Is Real: And So Is the Victory 71)

• Vaughn Allen: “The absolute horror of sin can be seen only when we look at the  . It would be well for us each day to pray that God would give us a genuine abhorrence of sin and a  for it because of what it did to the Son of God and because of what it does to us.” (71)

• Reason #2—We are not convinced that   sin is possible in this life.

• Great Controversy: “If those who hide and excuse their faults could see how Satan exults over them, how he taunts Christ and holy angels with their course, they would make haste to confess their sins and to put them away. Through defects in the character, Satan works to gain control of the whole mind, and he knows that if these defects are cherished, he will succeed. Therefore he is constantly seeking to deceive the followers of Christ with his sophistry that it is impossible for them to overcome.” (489)

• Signs of the Times: “Without Christ we cannot subdue a single sin or overcome the smallest temptation.” (August 10, 1891)

• Philippians 4:13—“I can do all things through Christ who strengthens me.”

• Jude 24—“Now to Him who is able to keep you from falling, and to present you faultless before the presence of His glory with exceeding joy.

• Selected Messages: “He who has not sufficient faith in Christ to believe that He can keep him from , has not the faith that will give him an entrance into the kingdom of God.” (3:360)

• Selected Messages: “John pointed the people to the Lamb of God who taketh away the sins of the world. He said, ‘Behold the Lamb of God, which taketh away the sin of the world.’ There is a great deal in that ‘taketh away.’ The question is, Shall we keep on sinning as though it were an impossibility for us to overcome? How are we to overcome? As Christ overcame, and that is the only way. He prayed to His heavenly Father. We can do the same....When tempted to speak wrong and do wrong resist Satan and say, I will not surrender my will to your control. I will cooperate with divine power and through grace be conqueror.” (3:195)

“Faith is the Victory”

There will be a fellowship dinner at Pioneer this Sabbath following second worship service in the commons on the lower level. Bring a dish to share and join the fellowship. Visitors are always welcome.

1 Peter 4:10, “As each has received a gift, use it to serve another, as good stewards of God's varied grace.”

A man, beaten down by the rain, came to our Food Pantry for clothes & food. He was wearing a thin jacket, no shirt or socks, and we were able to serve him. He was so happy to receive the clothes that he put them on in the parking lot. Then he sat in the  parking lot and ate an entire 16 oz. jar of peanut butter. He left a little more full, dressed, and hopeful than when he arrived. Thank God for the Better Living Center. (Spokane, Washington) This is only one story of many that is a result of Adventist Community
Services Centers around the North American Division that commit to serving God’s children.

ACS supports community outreach programs by funding development projects that make a major impact in your communities. A washer/dryer serves thousands of homeless to bring dignity and value to their lives. A shelter provides protection and offers hope. A portable shower trailer prepares someone for abjob interview. And so much more.

“I love this facility (New Life Food Pantry, Fultondale, AL) because their Christian walk shows in their attitude of the volunteers and the way they treat the pantry participants.” – Client A

“God is not unjust; he will not forget your work and the love you have shown him as you have helped his people and continue to help them.” Hebrews 6:10 By supporting ACS, you can make a lasting impact and know that your dollars are going to something that is making a difference in someone’s life.

Something In Common: Who Needs Christmas

The details of the Christmas story can seem unbelievable. So now, thousands of years after shepherds watched their flocks and wise men followed the star, you may be asking, “Who needs Christmas?”

Well, as it turns out, we all do. In the 3-part series, Andy Stanley shows us that the world needed Christmas, God needed Christmas, and we still need Christmas—but maybe not for the reason you think. Everyone is welcome. Sabbath mornings from 10:30-11:30 in PMC room 141.

Let’s gather before the main worship service for a Christmas breakfast potluck on Saturday morning, December 24 from 9:00 – 10:15 AM at the Pioneer Commons. Bring your favorite breakfast items.
A – G – bread, muffin, or pastries
H – P – breakfast casserole or hot/cold cereal
Q – Z – fruits
Pioneer will provide hot and cold drinks and nuts.

The Groupe Francophone D’Andrews will host a French sabbath school at 10:30, a francophone worship service at 11:45, and a fellowship potluck at 1:30 on Sabbath, Dec 10 in the Seminary Chapel. All speakers, learners, and lovers of the French language are invited to attend. Please bring a dish to share for potluck as able. RSVP to Lucile Sabas at sabas@andrews.edu if you can help with the meal. 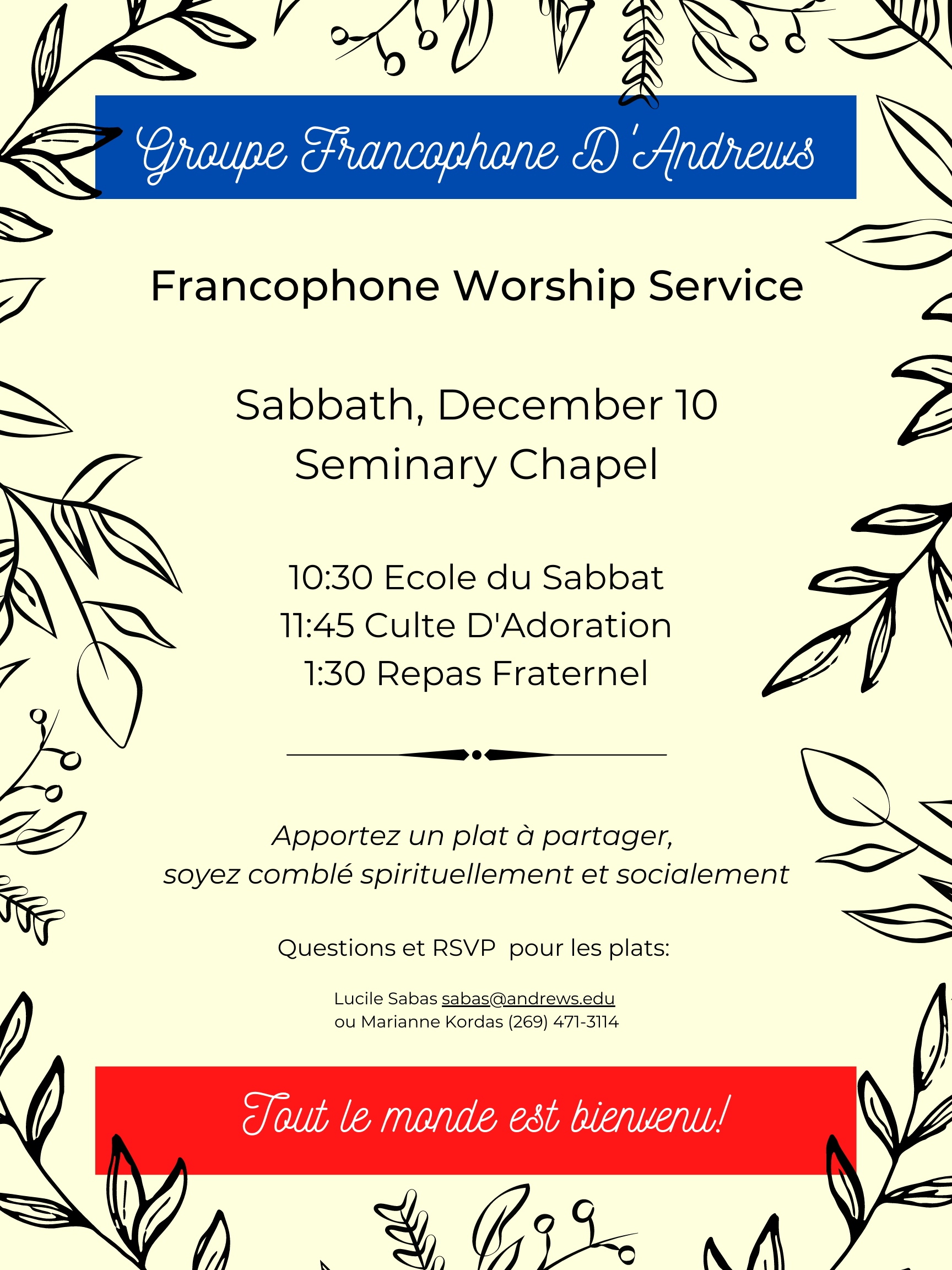 The Berrien Springs Garden Club cordially invites you to attend our annual Christmas cookie exchange from 2-5pm on Sunday, December 11 at Love Creek Nature Center. Come learn tips and tricks from fellow local gardeners and share delicious bakery next to the festive fireplace. All ages and abilities welcome.

The BSGC is a registered non-profit affiliated with Michigan Garden Clubs and National Garden Clubs which focuses on encouraging community gardening skills, appreciation of nature, and protection of native species and pollinators. 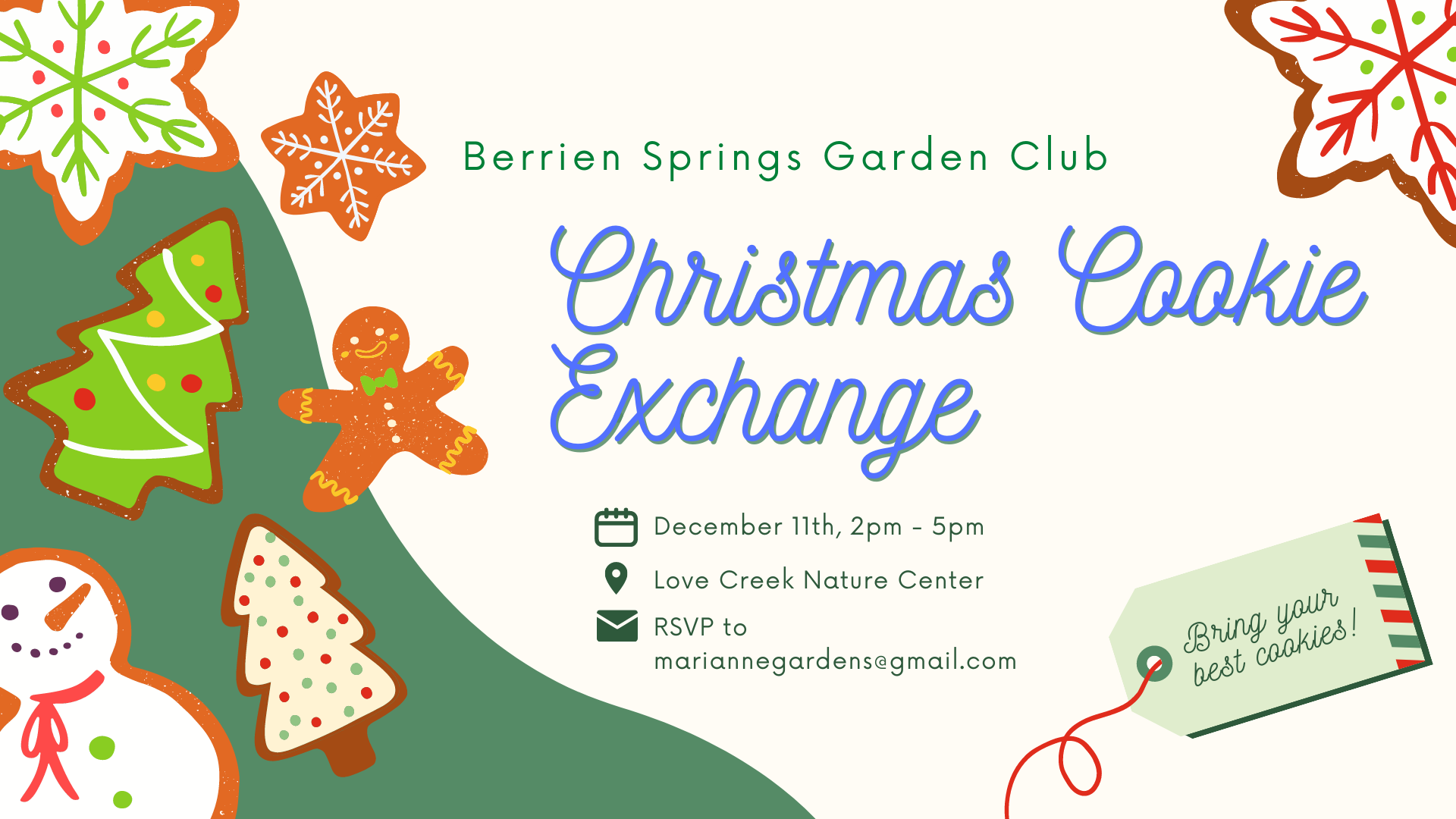 You are invited to a special Nathan Greene Art Studio Christmas Open House. The studio is located at 8458 Painter School Road, Berrien Center, MI. All are welcome to attend!

At the end of November, the Renovate 2.0 project and fundraising is as follows:

The Project: The final guaranteed cost, as submitted by the general contractor, Weigand Construction, is $929,641.00. This amount includes a 3% contingency. The project begins on Tuesday, Dec. 27, and is to keep on-budget. The elevator is on order and should be here mid-May 2023.

This January our Health and Wellness Ministry will launch a weight management program for the church and community called Best Weigh. It’s a proven system that combines spiritual principles with nutrition and weight management. It will be led by Dr Ken
Kelln. We’re looking for up to 20 volunteers who can serve as greeters, weigh-in helpers, a/v, parking help, and more. To get more information or to register as a volunteer, text the word HEALTH to 269-281-2345 or you can call 801-513-8809.